SPOKEN BY GREAT MEN
“Give me 20 divisions of American soldiers and I will breach Europe . Give me 15 consisting of Englishmen, and I will advance to the borders of Berlin . Give me two divisions of those marvelous fighting Boers and I will remove Germany from the face of the earth.”
Field Marshal Bernard L. Montgomery, Commander of the Allied forces during WWII.
“The Americans fight for a free world, the English mostly for honor and glory and medals, the French and Canadians decide too late that they have to participate. The Italians are too scared to fight; the Russians have no choice. The Germans for the Fatherland. The Boers? Those sons of bitches fight for the hell of it.”
American General, George “Guts and Glory” Patton
“Take a community of Dutchmen of the type of those who defended themselves for fifty years against all the power of Spain at a time when Spain was the greatest power in the world. Intermix with them a strain of those inflexible French Huguenots, who gave up their name and left their country forever at the time of the revocation of the Edict of Nantes . The product must obviously be one of the most rugged, virile, unconquerable races ever seen upon the face of the earth. Take these formidable people and train them for seven generations in constant warfare against savage men and ferocious beasts, in circumstances in which no weakling could survive; place them so that they acquire skill with weapons and in horsemanship, give them a country which is eminently suited to the tactics of the huntsman, the marksman and the rider. Then, finally, put a fine temper upon their military qualities by a dour fatalistic Old Testament religion and an ardent and consuming patriotism. Combine all these qualities and all these impulses in one individual and you have the modern White Boer.”
Sir Arthur Conan Doyle 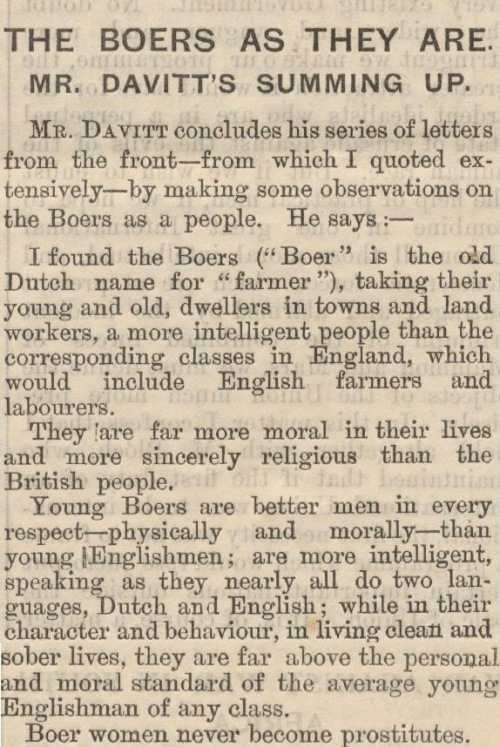 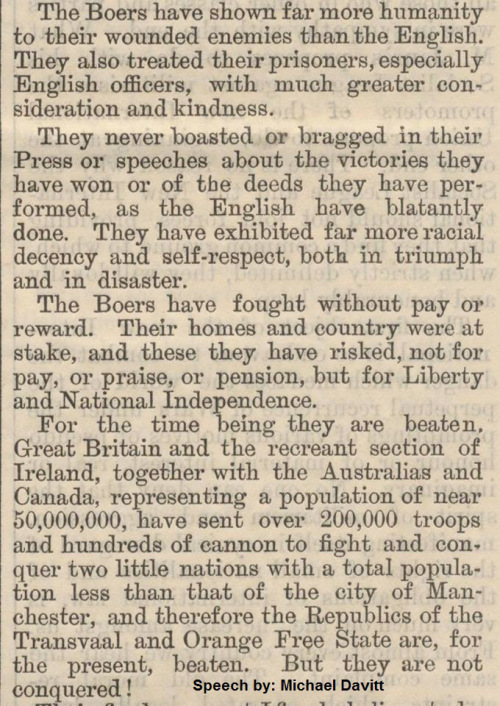